My Note: I have known Jason for better than four years now, and he is a living example of a Renaissance Man. A pioneer in film, music, authoring, and editing, Jason is a force in the world of weird fiction not to be “reckoned with,” but rather, admired. He is smart, very smart, and ultimately creative. Jason Brock is one of the hardest working men in the industry, and I am proud to have the opportunity to publish this guest post.

So Jason, pick a plot, put up a marker, and etch something into the stone!

When I was invited to write a guest blog by my friend Michael Aronovitz, I was at a loss as to what I would write about. My personal crises du jour? The art and craft of writing and editing? Something else? So the process went, as is typical for me. Then it occurred to me that my dear wife, Sunni, and I had been on a bit of a movie kick lately, and that started me thinking about the way film is put together, and why it is done the way that it is. We are filmmakers ourselves (The AckerMonster Chronicles!; Charles Beaumont: The Short Life of Twilight Zone’s Magic Man), so it was a natural topic for me to discuss, as well as something I know likely too much about, but find enjoyable nonetheless. Therefore, a brief foray into the world of cinema, through the filter of my personal experiences. . .

There is a saying: “Sometimes it would be helpful if my life had a soundtrack so that I would know how to react.”

In one sense, cinematic expression is the ultimate ghost in the machine. It is a wholly artificial artistic endeavor, requiring much in the way of long-term planning and execution, these coordinated with several groups of people. In film studies, mise-en-scène (the various design elements of theatrical or cinematic creation and their compositional arrangement, such as props, actors, costumes, sound, sets, lighting, and so on) along with cinematography and editing are used to describe and examine the experience and aesthetic merits of a production. Of course, there are both objective (Is the scene well lit? Is there a soundtrack?) and subjective (How does it make one feel? Did the message come through the medium?) criteria.

Similarly, just as a modern multitrack audio recording is not representative of a performance that is captured live by one source, and just as all dialogue in fiction is not really meant to be “realistic” as in a transcription—with all the “ums, ahs” and repetition of genuine human speech—but is an artifice designed to reveal character, compress information, and propel a story along, so too is film an entirely artificial experience, unless it is a live broadcast of an actual event. Films are shot for dramatic effect, scored for emotional impact, and all the action is choreographed based upon a script, which was written by a writer, changed by a producer, and realized by a director.

Yet all films have one common element, something I deem “editorial syntax.”

What I mean by that is that films can immediately be grasped conceptually—across all cultures and technological boundaries—because they are assembled in a way that all humans can understand visually. The reason for that is simple: as intelligent and creative animals, we all dream. Dreaming has been the inspiration for stories, art, music, and other modes of expression for all human history. They are universal to the human experience. They can be long, short, erotic, imbue us with superhuman/supernatural powers, act as expressions of remorse or taken as omens. They can be a form of necromancy when we communicate with long-dead relatives, or they can offer solace at particularly trying times in our lives. They can soothe, they can perplex, they can terrify. This panoply of emotions is exciting, vexing, strange, and invigorating. It acts as a wellspring of creativity, from famous authors and filmmakers to accountants.

Therefore, film, which mirrors many elements of this state of (un)consciousness, is a natural outgrowth of human creativity and serves as the engine which subtly powers, what I feel, is perhaps the greatest of all artistic forms: The marriage of the moving image (in more ways than one) and sound. It is not life, but in some ways is an enhancement—it can teach, record, inform, even grant a form of immortality. When we watch a film, the actors and creators—even long dead ones—are alive, even if only by our vicarious perceptions of them and their efforts, and if only for the duration of the work itself. After that, they retreat into the mists of the past once more. This, however, is a form of living—an aspect of the human condition and experience not only of dreams, but memory, also.

These are the cores of our humanity and the soul of our individuality. Moreover, we should recognize that importance, and celebrate it. 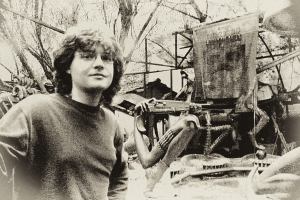 As an anthologist, he has done The Bleeding Edge, The Devil’s Coattails (both with William F. Nolan), and A Darke Phantastique (Bram Stoker Award Finalist). He was Art Director/Managing Editor for Dark Discoveries magazine for more than four years, and has a biannual pro digest called [NameL3ss], which can be found on Twitter: @NamelessMag, and on the Interwebs at http://www.NamelessDigest.com/. He and his wife, Sunni, also run Cycatrix Press, and have a technology consulting business.

As a filmmaker, his work includes the critically-acclaimed documentaries Charles Beaumont: The Life of Twilight Zone’s Magic Man, the Rondo Award-winning The AckerMonster Chronicles!, and Image, Reflection, Shadow: Artists of the Fantastic. He is the primary composer and instrumentalist/singer for his band, ChiaroscurO. Brock loves his wife, their family of herptiles, travel, and vegan/vegetarianism.

He is active on social sites such as Facebook and Twitter (@JaSunni_JasonVB), and their personal website/blog, www.JaSunni.com.